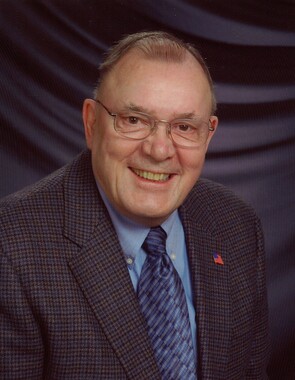 Back to Theodore's story

Theodore William Miller, 87, of Mankato, died on December 10, 2019 from complications of cancer.

A private family burial will be at Fort Snelling National Cemetery in Minneapolis at a later date. Mankato Mortuary is assisting the family with arrangements.

In lieu of flowers, memorial gifts may be directed to the Salvation Army.

Ted was born on October 2, 1932 in Randolph, MN to Theodore and Winifred (Mann) Miller. He graduated from South St. Paul High School, started at the University of Minnesota and graduated from the Naval Post Graduate School in 1955 earning his wings and a degree in mechanical engineering. On August 20, 1955 Ted was united in marriage to Julie Williams at the First Presbyterian Church in Mankato. Very shortly after that he survived a plane crash by bailing out while sustaining severe burns. Together they raised four children and lived in various places with Ted's military career including: Virginia, Monterey, CA, Lemoore, CA, San Pedro, CA, San Diego, CA, Beeville, TX, the Philippines, and Pensacola, FL before returning to Mankato in June of 1974. Ted and Julie were the owners of Flexible Plastics until 1990. Ted was a member of Rotary, AM Exchange and the First Presbyterian Church. He enjoyed watching hockey, bowling, dining with friends and especially golf in his later years.

He is survived by his sisters, Martha Legal and Judi Nordquist; his son, John (Ahna) Miller of North Mankato and their children, Maya and Van; daughter, Elizabeth (Erick) Marcheschi of Morgan Hill, CA and their children, Gunnar and Lukas; and granddaughters, Katie Miller, Patti Miller, Hannah Miller, Dana Miller and Chelsea Miller.

He was preceded in death by his wife, Julie (Williams) Miller; and his two oldest sons, Theodore (father of Hannah, Dana and Chelsea) and Randall (Jill) (father of Katie and Patti).
Published on December 13, 2019
To plant a tree in memory of Theodore "Ted" W. Miller, please visit Tribute Store.

Plant a tree in memory
of Theodore

Jenny O’Connor
I am sorry to hear about your Dad. He was always so funny and loved to kid around.
Great laugh!!
Peace be with him and you all.
Love, Jenny
View all