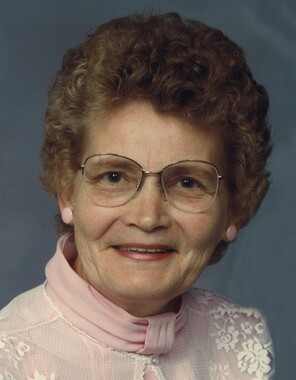 Methilda "Mathilda" Alene Campbell, age 88 of St. Peter, passed peacefully at home after a courageous battle with cancer.
Funeral service will be 11:00 am Friday, September 13, 2019 at Union Presbyterian Church with visitation one hour prior. In lieu of flowers, memorials are preferred to the church or the Andreas Cancer Center in Mankato. www.saintpeterfuneralhome.com
Methtilda Alene was born September 23, 1930 in rural Holland Township, Kandiyohi County to Martin and Hilda (Hebrink) Kamstra. She was baptized at the Prinsburg Reformed Church. The family moved to a farm south of Priam, which became their home. She attended Priam country school and later earned her high school diploma. Mathilda and Robert "Bob" Campbell were united in marriage April 28, 1949. Bob and Mathilda lived and farmed south of Priam also, near her family home for 17 years. They later moved to St. Peter, after purchasing the Quik Stop Drive Inn Restaurant. Mathilda also worked for the St. Peter Schools as a cook for 19 years. She was best known for her cinnamon rolls with cream cheese frosting. Mathilda was a fair person with a strong work ethic, which was passed on to the next generation.
Mathilda enjoyed gardening, especially her flowers, and being outside in the summer months and quilt making and sewing in the winter. She enjoyed the four seasons and always looked forward to the fall harvest. She provided many quilts to organizations (such as the Mary Jane Copland Foundation) and family members throughout the years. Her yo-yo design pillows and flowers are enjoyed by many.
Mathilda is survived by her four children: Steven of St. Peter, Darrell (Judi) of Garrison MN, Craig (Teri) of St. Peter and Rebecca (Michael) Hines of Dade City, FL; nine grandchildren: Shawn Campbell of Kasilof AK, Jennifer (Milton) Riebel of Mankato, Kyle Campbell of Mankato, Amy Campbell of St. Peter, Brian (Jamie) Campbell of Prior Lake, Nikki (Nick) Saputo of Prior Lake, Adam Campbell of Belle Plaine and Julia Hines and Kevin Hines of Dade City FL; 12 great grandchildren she deeply loved; and siblings: Vivian Blom, Gloria Epema, Florence Visser, Jane Ronning and Clinton (Linda) Kamstra.
She was preceded in death by her parents, husband Robert in 2007 as well as her brother Milton, brothers-in-law: David Visser, Alvin Epema, Ronald Ronning and Elmer Blom.
Published on September 10, 2019
To plant a tree in memory of Methilda "Mathilda" Alene Campbell, please visit Tribute Store.

Plant a tree in memory
of Methilda "Mathilda"

A place to share condolences and memories.
The guestbook expires on December 09, 2019.

Restore the guestbook to view the 1 more posts by family and friends, and share a memory or message of condolence of your own.