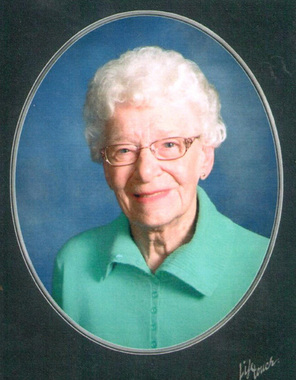 Back to Marjorie's story

Marjorie Richison, 97 of Winnebago passed away Wednesday December 11, 2019 at Parker Oaks. A memorial service will be held at 11am Monday December 16 at the First Presbyterian Church in Winnebago with Rev. Michael Roys officiating. Visitation will begin at 9:30 and continue until the time of the service at the church. Burial will take place at Basey Cemetery at a later date.
Marjorie was born July 28, 1922 to Elmer and Louise (Pearl) Hartman in Nashville Township, Martin County, MN. She attended Ridge Country School and graduated from Amboy High School. After high school she attended Johnson Beauty School and then worked at the Curl Shop in Mankato. After gaining some experience she returned to Winnebago and bought Looking Glass Beauty Shop. On November 7, 1942 she married Milton Krause, they had two children; Jolene and Gary. She later married Glen (Pete) Richison on March 9, 1974 in Bradon, SD.
Marge was very active in the community; she was a Cub Scout leader, taught Release Time, was a long-time member of the Presbyterian Church and involved in Circle and the Ladies Association there. She also just renewed her Ladies Auxiliary membership this month, making her a 50- year member. She enjoyed camping, fishing, playing cards and dancing with Pete and their circle of friends.
She is survived by her children; Gary Krause of Winnebago and Jolene (Stephen-Andy) Anderson of Mankato, granddaughters; Lexi (Nick) Pietsch and Brittany (Aaron) Smith, great-grandchildren; Kyle, Kendall and Ryan Pietsch, Avery and Carson Smith, her sister Marva Russell as well as many other nieces, nephews, relatives and friends.
Marge is preceded in death by her parents, her husband Pete, brother Merton Hartman, sister-in-law Lois Hartman, brother-in-law Robert Russell and a niece Diane Vrieze.
Published on December 12, 2019
To plant a tree in memory of Marjorie Loraine Richison, please visit Tribute Store.

Plant a tree in memory
of Marjorie

A place to share condolences and memories.
The guestbook expires on March 11, 2020.

Glenn and Rhonda Jordan
Sorry for your loss RIP
Joe and Leanne Dotson
Jo, so sorry for your loss. Your mom was an amazing woman and I'm sure the memories you have of her will last forever.
View all