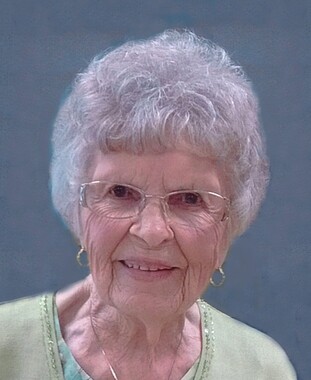 Back to Marilyn's story

Marilyn Theresa Hiniker Decker, 99 of Kasota, died November 27, 2019 at Ecumen Pathstone Living in Mankato.
Funeral Mass will be 1:00p.m., Saturday, December 7, 2019 at St. John the Baptist Catholic Church with visitation from 11:00a.m. until the time of service at the church. Burial will be at Calvary Cemetery in Mankato. The family prefers memorials be given to VINE, Pathstone, The School Sisters of Notre Dame or the donor's choice. Mankato Mortuary is assisting the family.
Marilyn was born May 19, 1920 at the rural Mankato home of her parents, Henry and Ruth (Klages) Lunkenheimer. As an only child, Marilyn completed ten years of formal education at the schoolhouse located a few miles from her home. She described her journey to school as walking across the pasture, down the lane to her grandparents' yard which led to the main road to the schoolhouse. After passing the state boards for tenth grade, she took some extra classes. She spent a lot of time with her paternal grandparents helping her grandma cook and clean because she suffered from arthritis. She learned much from these grandparents including a view of marriage that impressed Marilyn. They shared responsibilities and demonstrated mutual respect. Her grandma helped milk cows and her grandpa helped with washing the clothes. Marilyn also shared happy memories about her mother's family, especially her grandpa Klages. They had many sing-alongs and enjoyed playing card games together.
When she was 14 years old, Marilyn met the love of her life at a local barn dance. She and Robert John Hiniker dated for four years before marrying on June7, 1938. After a two-week honeymoon, Marilyn and Rob moved to the farmhouse in which she resided for nearly 80 years. Their first daughter arrived one year later and 13 more children followed over the next 18 years. According to Rob, the family was particularly balanced with 7 little hired hands and 7 little cooks. After 28 years together, Rob entered his eternal home on April 26, 1967 after six months illness with acute leukemia. Due to her strong faith in God and German determination, Marilyn remained on the farm as the last seven children finished high school. About this time, she renewed her friendship with Ben Decker, a childhood friend and recent widower. They were married on December 27, 1985. Ben joined Marilyn on the farm and became "Grandpa Ben." Ben entered his eternal home on November 22, 2013 after almost 28 years of Marriage to Marilyn.
Marilyn is survived by her 10 children, Robert Hiniker, Pam (L. Barth) Reller, David (Nancy) Hiniker, Richard (Renae) Hiniker, Cynthia (Gene) Erickson, Barbara Kraupa, Daniel (Karolynn) Hiniker, Candace (Todd) Mathiason, Kevin Hiniker, and Laurie (Douglas) Lloyd; 2 step-sons, John (Beverly) Decker, and Mike (Laurie) Decker; 36 grandchildren; many dear great-grandchildren and great-great grandchildren; son-in-law, John Griep; and daughter-in-law, Linda Hiniker Coltrain.
Marilyn was preceded in death by her two husbands, Robert and Ben; 4 children, Steven in 1976, Timothy in 1981, Judith Griep in 2004, and Ruth in 2018; grandson, Matthew Hiniker Hovland in 1984; and son-in-law, Paul Hurt in 2017.
Published on December 2, 2019
To plant a tree in memory of Marilyn T. ( Hiniker) Decker, please visit Tribute Store.

Plant a tree in memory
of Marilyn

A place to share condolences and memories.
The guestbook expires on March 01, 2020.

Sue Harper
Thoughts and prayers to the Hiniker family! Marilyn was a wonderful lady who always treated us like family. My girls even called her grandma😊😊. She will be missed by many people.
Sue and Tom Harper.
Clare Mountain
wonderful memories, loved her zest for life, love to all in the family. special blessing to Nancy. God Bless
Jerry and Clare Mountain
Ken Wilmes
What a wonderful and interesting life she lived and what a wonderfully written obituary. My sympathy to all of the family and may god bless her soul.
View all