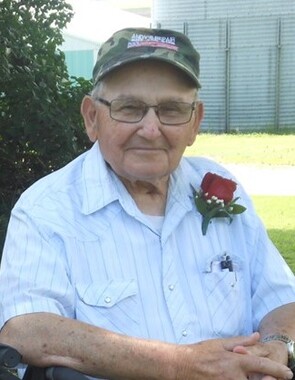 Back to Joseph's story

Joseph C. Moldan, age 89, of Searles passed away peacefully on Friday, November 15 ,2019, at the New Ulm Medical Center with his family at his side.
Mass of Christian burial will be 11 am on Tuesday, November 19, 2019, at St. John the Baptist Catholic Church in Searles. Monsignor John Richter will celebrate the Mass, and burial will follow in the St. John the Baptist Catholic Cemetery.
Full military honors will be provided by the New Ulm Area Comrades of Valor Honor Guard.
Visitation will be from 4-8 pm on Monday, and continue from 9-10:30 am on Tuesday at the Minnesota Valley Funeral Home-North Chapel in New Ulm.
To leave an online condolence for his family, or to sign the guestbook, go to: mvfh.org
Joseph is survived by his wife of 61 years, Joan "Dodie" (Depuydt) Moldan; his 8 children, Fred (LuAnn), Teresa (Kenny) Berg, Andy (Sue), Albert, Loretta (Paul) Gerasch, Ben (Kathy), George (Laurie), Rob (Cindy); he was Grandpa Seppie to, Jeff, Marcy, Dain, Lisa, Lori, Molly, Marisa, John, Julie, Amy, Brandon, Jake, Nick, Nate, Ben Jr., Brad, Elizabeth, Joe, Aubrey; 3 step-grandchildren, Josh, Jared, and Jessica Steele; 13 great-grandchildren and 3 step-great-grandchildren.
Joseph "Joe" Moldan was born December 8, 1929, in Mulligan Township, Brown County, Minnesota to George and Mary (Sellner) Moldan. He grew up on the family farm near Comfrey, Minnesota. Joe attended country school through the eighth grade, two of which were spent at St. Marys' Catholic School in Sleepy Eye. For eleven years, he worked for his uncles and aunts on their farms. Joe helped build many barns and farm buildings in the surrounding area. He went in to the Army for 2 years and spent most of this time in Korea as a Corpsman and Explosive EOD. Joe attained the rank of Sergeant in the 14th INF Reg. 25th DIV. He was a proud member of the Seifert-Bianchi American Legion Post 132. He was also a devout and dedicated member of St. John the Baptist Catholic Church in Searles where he was also a part of the St. Joseph/St. Elizabeth Catholic United. Joe was proud to be member of the Minnesota Music Hall of Fame.
Joe met Dodie at the Gulden's Ballroom in Searles, Minnesota. They were united in marriage on August 26, 1958 at the Immaculate Conception Catholic Church in St. Clair, Minnesota. After marriage, they raised their family and farmed together on their dairy farm for over 60 years.
Joe was a special Dad, always working hard to provide and take care of Mum and the kids. He enjoyed Old-Tyme music, playing the concertina, gardening, any sporting events, welding and fixing things for his family and others. He enjoyed shopping and getting the groceries for the holidays and many family get togethers. He had a special devotion to the Sacred Heart.
He was preceded in death by his parents, George and Mary (Sellner) Moldan; his sister, Mary (Valerian Woratschka; brothers, William (Phyllis), Edwin, Florian (Dorothy) and an infant brother, two angels, and three grand-angels in heaven.
Memorials are preferred to the St. John the Catholic Church Cemetery or the donor's choice.
Mvfh.org
Published on November 17, 2019
To plant a tree in memory of Joseph C Moldan, please visit Tribute Store.

Plant a tree in memory
of Joseph

A place to share condolences and memories.
The guestbook expires on February 15, 2020.

We are so sorry for your loss. Joe was always a bright spot - always smiling and asking how everyone was - he will be missed.
Amy, Todd, Paige, Kate, Jack & Brooke