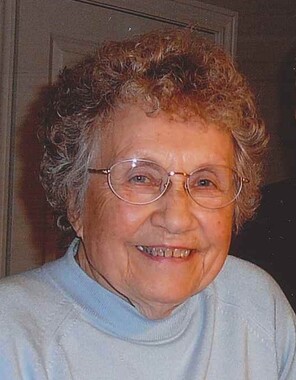 Back to Iva's story

The Lord called Iva Boyd Nere to her heavenly home on November 19, 2019 at age 99. Funeral services will be held at 2:00 p.m., Sunday, November 24, at Woodland Hills Funeral Home & Chapel, Mankato MN. The family will greet friends and relatives from 1:00-2:00 p.m., interment will be in Woodland Hills Memorial Park in Mankato.
Iva Marian Boyd was born September 25, 1920, number six of nine children to Oakley Wm. Boyd and Inez Leo (Miller) Boyd, on a farm north of Castle Rock MN. At the onset of the Great Depression, the family moved into Castle Rock, when I was eight years old. It was there I was baptized into the Methodist Episcopal Church of Castle Rock on April 1, 1934 by Pastor Glenn Teska. In 1935 the family moved to Dundas MN and I attended and graduated from Northfield High School in 1938. It was in my parents' home that Gerhardt (Hap) Nere and I were united in marriage on October 5, 1940 by Pastor John DeVries. We were blessed with four wonderful children. On June 1, 1941, I was confirmed into the Lutheran faith by Rev. Ackerman and Rev. Peterson at Immanuel Lutheran Church, transferring to St. Paul's about 1947.
Throughout the children's growing years, I chose to be a stay at home mom. For my enjoyment I joined the church's Senior Choir, was a leader of a church Girl Pioneer group, member of a church circle, and later sewed in a rug making group at church. I also spent about twenty-five years as a Gray Lady at Mankato Mayo Clinic when it was Immanuel Hospital, then Immanuel-St. Joseph Hospital. For a time, I did alterations for the Dahl House in the Madison East Mall as I enjoyed sewing.
After retirement, Hap and I spent twenty-one fun winters in our mobile home near Harlingen TX, selling it in 2001. The following year, I suffered a stroke from which I partially recovered.
Survivors are children Karen Sackett, Estes Park CO, Diane (Bob Shaver) Offerdahl, Bismarck ND, Cheryl (Marvin) Crouch, Waco TX, and Terry (Mary), North Mankato MN; former son-in-law, Bob Offerdahl; grandchildren John (Theresa Gordon) Spotts, Boulder CO, Jeff (Dorey) Spotts, Highlands Ranch CO, Matthew (Leah) Offerdahl, Tucson AZ, Jessica Offerdahl, Mandan ND, Samantha (Sean) Offerdahl Morrison, Helena MT, Bryan (Elizabeth) Crouch, Waxahatchie TX, Brad (Jennifer) Crouch, Waco TX, Chad (Jordan) Nere, Melbourne FL, Dustin Nere, Loveland, CO; great grand children Christopher, Austen, Landon, and Riley Spotts, Olivia Hellman, Benjamin and Emerson Offerdahl, Addyson, Paisley, Taryn, and Jett Crouch, Jacob, Selah, and Micah Nere; great great grandchildren Milo and Lacey Spotts; by many other relatives and friends. Preceded in death are my husband, parents, and siblings Genevieve Bodine, Lorraine Grant, Floa Finholdt, Edith Cornell, Allen, Mark, Robert, and Ralph Boyd.
Memorials are preferred to go to Ecumen Pathstone, Mayo Clinic Hospice, Vine, or a charity of the donor's choice.
Published on November 20, 2019
To plant a tree in memory of Iva M. Nere, please visit Tribute Store.

Plant a tree in memory
of Iva

A place to share condolences and memories.
The guestbook expires on February 18, 2020.