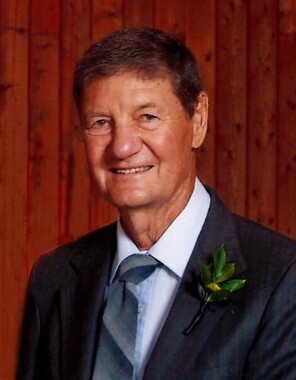 Back to Gerald's story

Gerald Lloyd Graham, age 91, was called to his heavenly home on February 9, 2020.
Gerald (Jerry) Graham was born August 21, 1928 to Walter and Delphine (Curley) Graham at home in rural Donnelson, Iowa. He was baptized at Sharon Presbyterian Church and confirmed at the Presbyterian Church in Bonaparte, Iowa. His mother died when he was 12 years old, and the family then moved to Farmington, Iowa. Jerry loved and excelled in athletics, participating in baseball and basketball in high school, and his teams advanced to the state tournament in both sports. After graduating from Farmington High School in 1946 he enlisted in the Army, and served in the Military Police in Korea for 1 ½ years. When he returned home from the Army he went to the University of Iowa to pursue his college education. He successfully completed his education, played on the Hawkeye baseball team, and graduated with a degree in Physical Therapy.
While at the University of Iowa he met the first true love of his life Barbara Lee, and they were united in marriage on September 6, 1953. They were blessed with a full and loving life together, including 4 children Patty, Gordy, David and Nancy. Barbara died in 1980.
On December 22, 1990 he married Joan Klingbeil, his true love for the next chapter of his life. They enjoyed many years of traveling, family time, loving companionship and countless activities together. In their retirement years, they continued do volunteer work at church, for Meals on Wheels, and lived a life filled with acts of service to others. In his leisure time Jerry loved to golf, enjoyed trying to improve his game and treasured the friendships he developed with others on the golf course.
Jerry worked as a Physical Therapist for nearly 38 years, helping countless people recover from injuries or diseases. He started his career in Virginia during the polio epidemic, then went to hospitals in Sheboygan and Eau Claire Wisconsin before moving to Mankato. He was the lead therapist and director of the Physical Therapy department at Immanuel - St Joseph's Hospital from 1959 through 1990. He was a very skilled and professional therapist, and was best known for his kind, gentle and compassionate interactions with each of the patients in his care.
Jerry is survived by his wife Joan, children Patty (Chris) Burseth, David (Kristin) Graham, Nancy (Joe Meixl) Dobson, daughter in law Carolyn Graham, Joan's daughter Julie (Steve) Wolner, 15 grandchildren, 20 great-grandchildren, and many nieces and nephews.
Jerry was preceded in death by his parents, wife Barbara, son Gordon, 3 sisters, 3 infant siblings, 1 niece, two nephews and step-son Alan Klingbeil.
Visitation and funeral services will be held on Sunday February 16, 2020 at Resurrection Lutheran Church in Mankato. Visitation will be 12:00-2:00 pm, Funeral service at 2:00 pm. A private family burial will be held at Minneopa Cemetery. Northview- North Mankato Mortuary is assisting the family with arrangements. Memorial gifts may be directed to University of Iowa Gerald Lloyd Graham Scholarship Fund, Mission Save a Smile, Mankato Area Children in Need, or to donor's choice.
Published on February 11, 2020
To send flowers to the family of Gerald Lloyd Graham, please visit Tribute Store.

Send flowers
in memory of Gerald

A place to share condolences and memories.
The guestbook expires on May 11, 2020.

Billy and Peggy Pomranke
Our heartfelt condolences to entire family: we met Jerry at Oak Terrace when he was there — lived down the hall from my Mom. The most delightful family indeed. Our sympathy n prayers to entire family ❣️♥️🙏
Teagan Kelly
Jerry was a true blessing when he was living at Oak Terrace. He was a spitfire but could always make me laugh! I always knew I could go in and talk to him whenever I wanted to. I am so so upset that I never got around to visiting him again. To Joan, thanks for always helping me annoy him, and I’m thinking of you and all of your family. I still plan to be a physical therapist, and I’ll think of Jerry along the way.
William E. Borchardt
JOAN AND FAMILY: SORRY FOR YOUR LOSS. I AM NOT IN PHYSICAL CONDITION TO MAKE THE FUNERAL OR VISITATION BUT WANT TO CONVEY MY RESPECTS. WILL MISS SEEING YOU IN YOUR FREQUENT WALKS PAST OUR HOME. BILL
Phyllis Jenkins-Meyer
Dear Graham Family, I am so sad to read of the death of your dear husband, dad, grandpa, and friend. My thoughts and prayers are with you during this sad time. May the Lord give you strength! Lovingly, Phyllis
View all