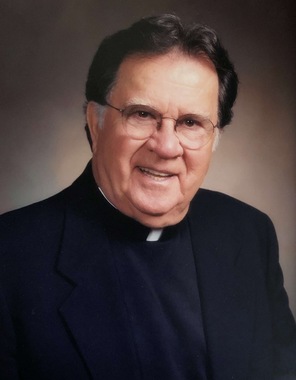 Back to Father Clayton's story

Mass of Christian Burial will be held on Wednesday, December 11, 2019 at 11:00 a.m. at St. Joseph Catholic Church, 512 S. Elm Ave., Owatonna, MN with The Most Reverend John M. Quinn, Bishop of Winona-Rochester Diocese officiating. Interment will be held at the Sacred Heart Cemetery in Heron Lake, MN at a later date to coincide with Father Clayton's 70th Ordination.

Visitation will be held on Tuesday, December 10, 2019 from 3:00 to 7:00 p.m. at the Parker Kohl Funeral Home, 1725 Lyndale Avenue N., Faribault, MN and at the church on Wednesday for one hour prior to services. The Medford Knights of Columbus will recite the rosary at church on Wednesday morning at 10:30 a.m.

The family prefers that memorials be directed to the Knights of Columbus, Sacred Heart Catholic Church in Heron Lake, MN, St. Mary of Mount Carmel or Catholic Charities Organization in Winona, MN in memory of Father Clayton.

Father Clayton J. Haberman, the son of Alfred and Louise (Appel) Haberman was born on March 19, 1924 in Heron Lake, MN and was baptized on April 1, 1924. Following high school Father Clayton attended and graduated from Croisier College in Onamia, Minnesota (3 years) and St. Paul Seminary in St. Paul, Minnesota (5 years) where he completed degrees in Philosophy and Theology. He was ordained a Catholic Priest on June 3, 1950. His first assignment was at St. John the Evangelist Catholic Church in Rochester, MN and later he would serve in other communities in Minnesota including, Caledonia, Freeburg, Westbrook, Jeffers, Mabel, Canton, Iona, Adams, Janesville, New Richland, Ellendale, Waldorf, Rose Creek, Lyle, Fairmont and Medford.

When time would allow, Father Clayton enjoyed hunting and was an avid pheasant hunter all of his life. He also enjoyed traveling and sitting around with family and friends having good conversation.

Father Clayton is survived by his sisters, Maxine Luft, Mary Ann Leopold and Marilyn Rogers and by a number of nieces, nephews, great nieces and great nephews who loved him dearly.

Father Clayton is preceded in death by his parents, Alfred and Louise Haberman, his sisters, Edna Haberman, LaVerna Schaffer, Helene Miranowski and Betty Shea and by his brothers, Marvin Haberman and Claire Haberman.

Plant a tree in memory
of Father Clayton

Mary Herzog
Father Haberman was one of the most gentle, caring people I have ever had the pleasure of meeting. I feel very blessed to have known him.
Maxine Gaul
The entire Joe and Marge Ackerman family of Iona, MN, sends our sincerest sympathy. Father was a longtime friend of our family. A memory.....There were many CYO dances that were held while Father was the priest at St. Columba, in Iona. Blessed be his memory.
View all