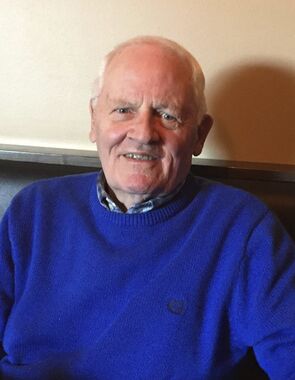 Back to Edward's story

Edward L. Rasmusen, age 79 of Le Sueur, died Tuesday, November 5, 2019 at Regency Hospital in Minneapolis with his loving family by his side. Memorial service will be 11:00 a.m. on Friday, November 15 at First Lutheran Church in Le Sueur with Pastor Carl Bruihler officiating. Visitation will be from 3-7 p.m. on Thursday, November 14 at the Kolden Funeral Home in Le Sueur, and also one hour prior to service time on Friday at the church. Interment will be at a later date in Minnewaska Lutheran Church Cemetery in Starbuck, MN.

Ed was born on February 27, 1940 to Carl and Olga (Strum) Rasmusen in Starbuck. He graduated from Starbuck High School in 1958. He attended Moorhead State University receiving his BS degree in Mathematics in 1963, and in 1974 he received his MS degree in Education from Mankato State University.

Ed married Geraldine Barsness on October 19, 1963 in Starbuck. They eventually made their home in Le Sueur where Ed taught high school math from 1967 to 1997. Geri passed away in 2009. On April 20, 2013 Ed was united in marriage to Annette Kinkeade.

Ed was actively engaged in the community, serving as a volunteer ambulance driver, city council member, mayor, hospital board member and church council member. He enjoyed golf, travel and time with family, and he took great pride in his reputation for telling corny jokes and having a meticulously manicured lawn.

Plant a tree in memory
of Edward

A place to share condolences and memories.
The guestbook expires on February 05, 2020.

Simply Elegant Spathiphyllum was purchased for the family of Edward Rasmusen by Tina Martin.  Send flowers

Tony Nagel
My sincere condolences to the family. I had the pleasure of having one class with Ed my senior year at LSH wayyy back in 1990-91. Ed always kept it light in class and incorporated his students into his jokes daily. The world won't be the same without ol' Mr. Green Jeans. May you rest in peace Ed.
View all