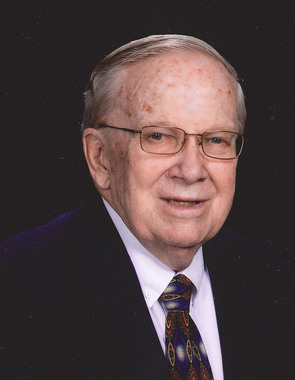 Back to Donald's story

Donald (Don) K. Meyer was born on April 10, 1930 to F.W. and Elsie (Beasley) Meyer on a farm southwest of Okabena in Alba Township, Jackson County, Minnesota. He lived on the farm until the family moved to Kinbrae. A few years later the family settled in Wilder. Don graduated from Windom High School in 1947. After high school, he started working for Thompson Lands/Fairland Management as a bookkeeper. He retired 52 years later as President. He was quietly proud to serve our country in the Korean War from April 1951 until January 1953.

On September 21, 1957, he was united in marriage to Darlene Becker at the Windom Methodist Church. They became parents of three children, James, Robert & Joanne. Don served in several roles over the years with the church and with the Wilder city council. The family enjoyed many camping trips throughout the US.

Don & Darlene moved to Mankato in 2011. Don served on the board of the senior housing cooperative where they lived and managed the finances for the cooperative. He passed away in Mankato, Minnesota on Friday morning, January 24, 2020.

Don is preceded in death by his wife, Darlene, his parents, sister Marion Klaasen and brother Warren (Bud) Meyers.

Don will be remembered as a loving husband, father, grandfather, great-grandfather, trusted leader and treasured friend.

A Celebration of Life Service for Donald "Don" Meyer, age 89 of Mankato, formerly of Windom will be at 10:30 AM on Saturday, February 1st at the First United Methodist Church in Windom. Burial will follow at Lakeview Cemetery in Windom.

Visitation will be on Friday, January 31st, from 4:00 PM to 7:00 PM at the LaCanne Family Funeral Home in Windom and one hour prior to services at the church on Saturday.

Condolences can be sent online to: www.lacannefuneralhome.com.
Published on January 30, 2020
To send flowers to the family of Donald Meyer, please visit Tribute Store.

Send flowers
in memory of Donald

A place to share condolences and memories.
The guestbook expires on April 29, 2020.