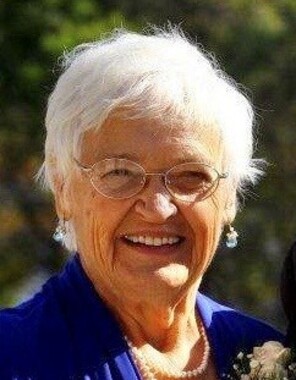 Back to Corinne's story

Corinne Louise (Rodning) Johnson, of St. Peter, died peacefully on November 24, 2019 with her family surrounding her. The intensely devoted wife, mother and community servant was 87.
Corinne Louise Rodning was born on December 6, 1931 and was the oldest daughter of Sven Clarence and Cora (Knutson) Rodning. She grew up on a farm in Nicollet County and graduated from District 13 and St. Peter High School in 1949. Corinne received her teaching degree from Mankato Teaching College and moved to Cartwright, North Dakota where she taught in a one-room school for a year before moving back to Norseland to marry her brother Harold's best friend, Robert.
Corinne and Robert Johnson were married on October 20, 1951 at Norseland Lutheran Church. She got her first taste of life as a farmer's wife when Robert worked all day harvesting with his brother Jerry before their wedding ceremony.
They moved into an apartment above Swenson's Norseland General Store for a year before moving to Norseland Eastview Farm, where she and Robert lived for the next 67 years raising cows, pigs and chickens and grew corn, soybeans, alfalfa and wheat.
Corinne was devoted to her seven children and the community where she raised them. She served as a Sunday School teacher and choir member at Scandian Grove Lutheran Church and was its first female church board member. She also served as a 4-H leader in Norseland.
Corinne was the number one fan of her kids at sporting and extra-curricular events. She and Robert traveled thousands of miles across southern Minnesota to watch their kids compete. In later years, you could count on her to know the score of a Twins, Vikings or any Gophers game she could find on TV.
After raising her children, Corinne decided to put her endless farmer's wife energy into working at Pillsbury Green Giant, ADC, Traverse Elevator and the Norseland Creamery.
Corinne cherished the women in her Card Club. Over 60-plus years, she and her friends took a monthly break from their hectic lives to play 500, laugh and share stories of their families. She also loved studying scripture with her Bible Study Groups.
Corinne loved to cook and bake for friends and family and was known for her homemade bread, lefse, cinnamon rolls and Swedish tea rings. She also enjoyed gardening, canning and sewing clothes for her family and quilts for Scandian Grove.
Corinne and Robert spent more than 68 years together and took great pride in their family. It seems only fitting that they would both pass into eternal life together, surrounded by those who loved them. Robert died just one day after his beloved wife.

Plant a tree in memory
of Corinne

A place to share condolences and memories.
The guestbook expires on February 24, 2020.

Greg Quist
So sorry to hear of the passing of both Corrine and Bud. Although very sad, it is heartwarming in knowing they left this world for the next together. I loved the opportunities to talk with them on recent visits to MN the past few years. As a youngster, I have so many memories of those farm and 4-H days, Scandian Grove church life, birthday parties at their farm, and high school days in growing up with the Johnson siblings. Such a great tribute by you all in that local news video on them about their love for each other and your love for them. Condolences to you all. May both Corrine and Bud RIP and in Joy.
Greg
Judy Tostenson Teigen
A beautiful love story.
View all