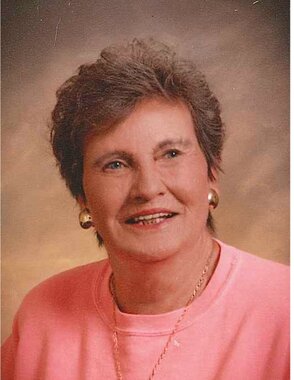 Back to Beverly's story

Beverly Jean Kroll, 90, of Le Center, passed away peacefully on January 10, 2020 at Pheasants Ridge. Visitation will be held on Thursday, January 16, from 4:30pm to 7pm at Le Center Funeral Home in Le Center. Memorial Services will be on Friday, January 17 at 11am at the Le Center Funeral Home with Pastor, Terri Horn officiating. Interment will be in the Wood Lawn Cemetery in the Spring. In lieu of flowers, memorials are preferred to Mayo Hospice.
Bev was born on January 3, 1930 to Delbert and Jennie Wagner in Mason City, Iowa. She graduated from Mason City High School, she went on to nursing school at St Luke's School of Nursing in Davenport, Iowa. Although nursing was her passion, when her husband Virgil died (1971), her primary job became raising her four young children.
Bev loved Le Center and spent her lifetime giving back. She was the first female to serve on the city council and also as the mayor. Bev was a loyal member of the Le Center United Methodist Church, American Legion Auxiliary and VFW. Beverly was presented with the Certificate of Recognition from the Mayor of Le Center and Governor, Albert H. Quie for being an outstanding citizen of the City of Le Center and the State of Minnesota by freely giving the generous gift of time, talent, and energy as a Volunteer. She donated hundreds of hours of volunteer service, including: pre-school hearing and vision testing, Cub Scout Den Mother, Girl Scouts, Red Cross Director, Red Cross blood program (45 years), A.F.S Program, United Methodist Church, United Fund Drive, Region 9 Representative, Le Sueur County Foster Parent Program.
Bev loved being a grandmother and great grandmother; she was quick to share funny stories or pictures whenever the opportunity presented itself. She was an avid Minnesota Twins and Timberwolves fan. When her teams were not playing she could be found playing cards, playing bingo, baking or reading. Bev loved sharing her books and her baked goods.
Bev is survived by her children Terry (Jeff) Markham of Arizona, Robin (Randy)Bode of Le Center, and Scott (Don) Kroll of California; grandchildren, Amanda (Dom) Pernai, Molly (Adam) Baslow, Ryan (Jessie) Bode, Brady (Kassie)Hartmann, Jameson Bliss, Riley Bliss; sister Phyliss Preftakes of Mason City; niece Jean (Norm)Nordstrom of Michigan, great niece Nicole Nordstrom and eight great grandchildren.
Bev was preceded in death by her husband Virgil Kroll; son Timothy Benton; sister Delores Wagner and brother in-law Alex Preftakes.
Her legacy will live on through her family and friends. She was an independent and resilient woman who taught us to: believe nothing is impossible, be gracious in all that you say and do, and to give more than you receive. She was one of a kind and we will miss her dearly.
Arrangements are with the Le Center Funeral Home in Le Center. 507-357-6116. On-line condolences may be left at www.lecenterfuneralhome.com.
Published on January 13, 2020
To send flowers to the family of Beverly Jean Kroll, please visit Tribute Store.

Send flowers
in memory of Beverly

A place to share condolences and memories.
The guestbook expires on April 12, 2020.

Debra Gronholz
Have many, many memories wishing I could be there with her family. But I live in Minnesota and the weather says no sending LOVE and hugs xo
Chris smith
Bev was a special lady I once skydive into the tennis court she had built in LeCenter
Julie Harmon
Bev was someone I always looked up to. She seemed to be everywhere there was a need for a volunteer. She was a very giving person with a quick smile and quiet laugh. She spoke her mind if her viewpoint varied from yours, but she was always fair. She certainly was a LeCenter icon as I was growing up. Our heart felt condolences to her wonderful family.
Tim Kelly
My prayers and condolences for the loss of this "Great Lady". Boy, I could write a book with my memories of Bev. Many happy and fun, as well as some very sad ones. So for now I salute my dear Den Mother and friend. I'm sure she will be welcomed home by many, but none greater than Tuff, and my dear friend Tim. May God bless all of you.
Greg & Judy Emmers
Saddened to hear the news. Bev was like a second mom to many of us in our younger days. Our thoughts and prayers are with all the family in this difficult time.
Dale Schmoll
I am so sorry to hear the news that Bev passed away. She was a great lady who will be remembered fondly by so many. She welcomed me with open arms when I became part of the Le Center community in 1993. God Bless you during this difficult time. Doc
Linda Gronholz
My sympathy and prayers for all.
View all