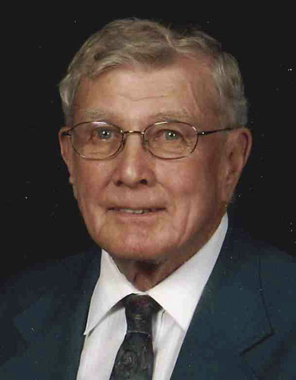 Back to Arden's story

Arden Williams, age 93, of St. James passed away on Sunday, February 9, 2020 at Mayo Clinic Health System - Mankato. Funeral services will be 11:30am, Saturday, February 15, 2020 at First Lutheran Church in St. James with Rev. Andy Hermodson-Olsen and Rev. Matthew Seegert officiating. Visitation will be at the church on Saturday beginning at 10:30am. Burial will be at a later date at Albion Lutheran Cemetery rural St. James. You may send the family condolences online at www.sturmfh.com. Arrangements are with Sturm Funeral Home in St. James.

Arden was born November 22,1926 on the family farm in Watonwan County, Odin, MN, to L H. and Anna (Mandsager) Williams. Arden was baptized in Odin, MN April 24,1927 and was confirmed at Hope Lutheran Church in Minneota, MN May 17, 1940. Arden attended country school in Lyon County, MN through 8th grade. When he left school, he remained on the farm to help with the family farming operation.

Arden married Arlene Haukvik on June 28,1947 at the Albion Lutheran Church. In 1949 Arden and Arlene moved to Casa Grande, AZ, where he worked at 0. S. Stapley as a shop foreman. Their son, Lee Arden, was born in Casa Grande in 1952. They returned to Minnesota and moved to Hanska in 1953 where Arden became part owner of Peterson-Williams Trucking, later Reddeman-Williams Trucking, for 23 years. Arden and Arlene became members of Zion Lutheran Church in Hanska where he served on the Board of Trustees. He also served on the Hanska Village Council and was a member of the Hanska Volunteer Fire Department.

In 1967 Arden and Arlene moved to St. James, MN, where he worked for Central Livestock Association buying and selling feeder cattle. He continued there until he began managing a cattle feedlot in Storden, MN. Following that Arden worked on road construction for 12 years before he retired.

In addition to his parents and grandparents, Arden was preceded in death by his wife, Arlene, sons, Sherman, who died in infancy and Lee Arden. He was also preceded in death by brothers Eugene Williams and Lyle Williams, sister Eunice Broughton, brothers-in-law Conrad Broughton, Phil Peterson and sister-in-law Janice Williams.
Published on February 11, 2020
To send flowers to the family of Arden Williams, please visit Tribute Store.

Send flowers
in memory of Arden

A place to share condolences and memories.
The guestbook expires on May 11, 2020.